On Tuesday, May 24th Maurice aka Mo passed over the rainbow bridge and for those who knew him you know he never touched the yellow. I will miss him more than anyone will ever know. He taught me more than I would have ever thought a dog could teach a person. One thing was never take agility or life so seriously enjoy every moment you are only on this earth for a short period and you should enjoy every moment. Also if it wasn’t for Mo I wouldn’t have met so many of my close friend such as Trisha, Jeff, Lisa, Chris and so many others that I could name. He enjoyed life and everything that went with it from agility to Frisbee to his 2 or 4 legged friend. There is so much I could say about him but it is so hard to but my love for him into words.
I want to thank everyone for their warm and loving comments. It is so nice to see he not only touched my life but others also.
Please don't mourn his death but celebrate his life.

If you read this please give your 4 legged friends an extra hug tonight and remember that they are gone way too soon.

I had to wait for Bob Domfort to post, and since he has, it's my turn. Here goes.

Maurice, otherwise known as Mo, even though he was Bob's dog, has become like my adopted dog over time. I can never thank Bob enough for letting me into his life. It started when Bob let me run Mo at trials, maybe 8 years ago. Bob wanted Mo to have fun and maybe get a Q or two. He said I was a better handler than him. Well, the truth is, when Mo was on, he made anyone look like a good handler! And when he was off, well, everyone enjoyed watching him :-)

While I enjoyed immensely running him at trials, and becoming both a better handler in general and better at teamwork and success with him, the awesome side benefit was falling in love with the dog outside agility. Mo was a dog that you just smiled at when you saw, no matter your mood he picked you up. He could do it all: agility, comfort when you were sad (as he was to me after Buddy died 3 years ago), therapy dog, demo dog, kid greeter.

And, well, it's time to mention Bob with Mo - the perfect pair. They were soulmates, it was so clear to see. He loved him so much, they were inseparable. Mo taught Bob how to enjoy life and be positive no matter what. He was Bob's heart dog.

These past 4 months it has been hard to watch Mo declining. Mo wanted to run and play like he used to, but his body was getting worn out. In the end his body just gave out. We helped him leave his body and be free again, even though it was hard it was the best gift we could give him in the end.

It's hard to do, but we're trying to remember with smiles all the happiness he brought to our world, all the joy he spread everywhere he went. Of course there are tears, but when they fade we'll cherish how wonderful his life was, and how wonderful ours was for knowing him.

RIP, Mo, I know you are enjoying playing with my Buddy and all the other local agility dogs that have passed on.

I have already said a lot, lived through it with you. But here on Facebook let me say how very sad day it was when we lost Mo-Mo. It was inevitable, and the right choice, since we know he hated his body failing on him and wanted to be running and playing again. He held on long enough for us to get back to him to say goodbye, which was so very important to all of us. Thank you Mo, for doing that. Thank you for teaching me so much about handling, about friendship, about unconditional love, and about how to enjoy life and not worry about things! I will love you always, and I'll miss your comforting presence in my life.

And thank you Bob for letting me run him, and continue to run him, as we learned together how to work as a team. And even take him to camps and other things away from home. I will never forget how he eventually became a part of my family.

Bob- I will always remember watching on the sidelines holding my breath and crossing my fingers and toes in hopes that the yellow zone would grow bigger as Mo approached it. A lot of the times the yellow zone seemed to shrink. But every time that yellow zone disappeared as Mo approached it you always left the ring with your best friend that you loved and it always showed. The love between you shined brightly no matter what. You always look to the positive in everything and love your dogs dearly which is why I call you a good friend. Mo is now running agility with no pesky yellow! Love you Mo! (((Hugs)))

As you can see, Mo got his CT-ATCH at the CPE nationals we hosted in 2012; Barry Rosen took this awesome picture.

At the SoBAD CPE trial May 2015, Mo ran in the Retired Agility Dog (RAD) Run.  Bob and Trisha co-wrote this tribute. The info about Mo somehow got lost and Trisha had to read from memory, you aren't really able to hear what Trisha is saying on the video.  Here's the tribute in writing:

Maurice, a.k.a. Mo, a.k.a. Maurice Joseph, a.k.a. Mo Jo.  He goes by any of those names, but to Bob he’s his sidekick.  For over 10 years Maurice and Bob have discovered new things together.   Bob got into agility in 2003 because Maurice, just a year old at the time, needed something to do – he had too much energy.  Go figure!  Maurice, now 13 years old, still is over the top for his crack, which is agility.  Point him at an obstacle and he needs no more motivation.  Over his career Maurice has competed in CPE, USDAA, and Cynosport Rally Obedience, getting titles in all.  In CPE, he has gone the farthest, getting two CT-ATCH’s, competing in every CPE national event from 2005-2014, and having a blast along the way. Over the past year Maurice has shown signs of getting old, first having problems with strength in his back end, which was partly alleviated by hydrotherapy.  And, now his eyesight is going and he can’t always judge when to take off for jumps or contacts on course.  Bob will still bring Mo out for the occasional fun run, because Maurice doesn’t want to quit doing agility!

This is a picture of the lightning on the plane trip from Denver to Chicago on Monday night, May 24th.  The dark outline on the middle right is the wing, skyline with sunset to the west in the centerline; the lower left corner is the edge of the seat and window on the plane.  I managed to catch a bolt of lightning coming out of the cloud.

Thank you, Mo.  There is a story behind this picture.  It's a long one.  The short version is that he gave Bob a gift, this and other photos of him, taken by Shanon Waddingham on April 29th at Shatford Park, while Bob and others were setting up for the CPE Agility trial.  An incredible, special gift. 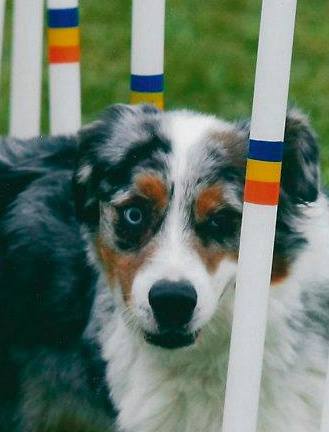